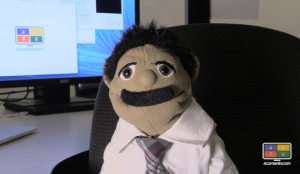 In announcing the appointment, Laurie Kain, news director of 4CTV said, “Phil has an incredible depth of news experience – on a local and national level – and I am thrilled to welcome him to our team. He will bring a new energy and fresh perspective to our network and I’m confident viewers will enjoy his broadcast style for his new weekly show.” Handy comes to Durango from DARN-TV, an affiliate of the marionette news channel in Houston.

As a network reporter, Handy was responsible for all editorial content including news, fashion, and cuisine in a four state region: Texas, Oklahoma, Louisiana and Arkansas. He began his journalism career as a civil rights activist for the Sock Puppet Equality Act and has branched out into other editorial content since that time.

Handy’s family originated in China and traveled the globe together in the elite New York Puppet Troupe throughout his early years. He draws on his entertainment background as a volunteer for the local hospital, where he stages puppet shows for the children. He is thrice divorced with two children. He graduated from the University of Connecticut where he earned a Bachelor’s degree in journalism with a minor in Dramatic Arts.

“4 Corners TV has a rich tradition of producing quality news with an irreverent twist that informs and entertains and I’m excited to join the team,” Handy said. “In addition, I look forward to learning to snowboard and riding the trails on my mountain bike.”

Sarah Healy, 4 Corners TV producer and talent development manager commented, “We’ve been searching for a special talent like Phil for a while. We needed a professional that had a very unique appeal. Phil fits the bill, plus, since he’s ridiculously good looking we should be able to attract more of the female demographic to the show.”

4 Corners TV, (4cornerstv.com) is an online news and entertainment network owned by Ballantine Communications, Inc. (ballantinecommunicationsinc.com) located in Durango, Colorado. The privately held parent company has over 60 years of history as a multi-media organization who operates in print, video, and digital formats.